R-Type Tactics II: Operation Bitter Chocolate (アール・タイプタクティクスツー -オペレーションビターチョコレート- ) is a tactical role-playing game developed and released by Irem in 2009 for the PlayStation Portable. It serves as the sequel to R-Type Tactics, known outside Japan as R-Type Command. The player controls three different factions, two of which being human and the other being the Bydo Empire. The game was planned for release outside Japan as R-Type Command II, however this version was never released.

Bitter Chocolate features the player as he navigates a fleet of space fighters and support units, as one of three factions - the Earth Allied Armed Forces (EAAF; an evolution of the Earth Space Corps in the first game), the Bydo Empire, and a new human faction called the Granzella Revolutionary Army (GZRA). The side-scrolling nature of R-Type Command's gameplay is retained in the sequel. Most levels are structured as in a side-scrolling shooter, with the player's units and the objective on opposite sides of the field. Units cannot change the direction they are facing, which has an important impact on gameplay, as certain attacks can only be performed in one direction. Although certain missions have the player's units facing right, there are missions in both Human and Bydo campaigns where they will face left. Players can also earn veterancy levels, which improve their units' hit points or evasion levels.

Like other turn-based strategy games, the playing field is also divided into hexagons with varying effects. The game maps are also larger than those found in the first game, with some levels encompassing behemoth space facilities. Some stages are also vertically scrolling.

Players can also customize their avatars under a new profiling system and can also interlink with their old profiles from the first game. The profile from the first game represents the Bydo commander who was forced to leave Earth for good at the end of Tactics. The player will assume this profile when the Bydo campaign is unlocked. However, this feature is only present in the Japanese release. The game also features branching mission paths that can be unlocked based on choices listed in the player's journal. The missions on the other path would be available when the player completes a campaign chapter.

R-Type Tactics II offers more than 200 different units, including many of the R-series fighters from the other R-Type games such as R-Type Final, plus units from other Irem games such as the Granvia-F submarine from In The Hunt. Each fighter has unique abilities such as sub-space movement (called "desynching") and a distinct set of attacks. During the game, the player acquires abilities enabling new units and upgrades to existing units to be purchased for his army. Furthermore, new units can be acquired by capturing certain objectives in levels, such as derelict space stations and starbases. The unit's development can also be tracked through a special technology tree. More powerful versions of unlockable units in the game are also available as downloadable content from the Playstation Network, but unlike the other units, the player can only acquire one of each.

Support units range from large carrier ships to maintenance units as well as the Force pods.

Force units can either be controlled separately or they can be attached to fighter craft. Attached Forces function as a unidirectional shield while providing the fighter with stronger attacks. When not attached, a Force is an independent unit that can be used as a tank.

Aside from mining Solomonadium, Etherium, and Bydolgen, the Rr2o-3 is also capable of building a space station on certain stages featuring core blocks, though at a cost in Solomonadium mined on the spot. The kinds of modules that can be assembled include expansion conduits, docking bays, missile and laser turrets, fixed Wave Cannon turrets, and radar stations. The player can assemble up to 30 modules per stage. Once a core block has been destroyed, the entire station complex is destroyed as well.

The EAAF's arsenal comprises most of the Force-capable R-series fighters seen in the history of the franchise. The Granzella Revolutionary Army (GZRA) has only one fighter with a Force system (the R-9A Ragnarok and the non-Bydo based Shadow Force, respectively), but have jamming support, which can mask units under a fog of war. Sonar can also be used to uncover "desynched" units without having to bump into them during a turn. Regardless of what faction the player starts with, most of the other faction's units can be unlocked later in the game. The player can also exit the mission without having finished it and retain whatever bonus boxes recovered in the level.

The Bydo feature evolved versions of previous units seen in Tactics, such as the Boldo cruiser.

Enemy units that are close to being defeated can be converted to fight for the player for one mission; units that are captured are recycled for resources at the end of the mission.

For the first time in the franchise, human characters with dubbed voices are introduced in the game, with both the EAAF and the GZRA having male and female characters that act as the player's in-game assistants.

The game is set in MC 0074, or 2176 C.E., nine years after the events of Tactics and seven years before Final". The Space Corps have successfully fought off the invasion of the Bydo Empire and peace has reigned. However, tension rises when the EAAF resists calls to demobilize and scrap much of its Force-based arsenal as the Bydo no longer pose a threat. Fed up with the EAAF's defiance, a faction based in Mars called the Granzella Revolutionary Army declares war on Earth and attracts many people to their cause.

Over the first two chapters, both factions skirmish within the inner planets of the solar system. They encounter the Bydo in Jupiter and fight to capture the Gail Rose Space Fortress outside Saturn. Outside Oberon, the player encounters an unknown machine civilization. The factions prepare for an attack on the Glitnir Hyperspace Station upon discovering that some GZRA members are planning something. Depending on a choice made at the end of a mission to Neptune, the player can swing around Triton to attack a GZRA outpost and mount a side attack on the Utgard Loki beam cannon in the Kuiper Belt or directly attack the Utgard Loki before the siege of Glitnir. It is discovered that the GZRA units occupying Glitnir are a new faction - the Solar Liberation League, an extremist wing of the GZRA. After conquering Glitnir, the joint EAF/GZRA force fights the SLL over the Tesseract, wherein they discover that the SLL are fighting alongside Bydo units. It is revealed that the SLL are able to field Bydo units using the so-called Bydo Bind System, a special mind-control system based on the Force pods. After defeating the SLL/Bydo forces in the Tesseract, the player gets word that the Bydo have invaded Earth again. As a result, the player's forces go out of warp space and go back to the Solar System and defeat the enemy (including recapturing the Gail Rose fortress). After driving the Bydo out of Earth, the human forces engage the aliens on another part of the Solar System and defeat the Bydo's Kombiler Lilil flagship.

Battleships consist of multiple components and use Hit Points as a damage meter. The ship can only be destroyed by directly damaging the body. The admiral must have at least one battleship in every skirmish.

Most fighters group in squads in 5, except for the OF-1. As the squad's numbers dwindle, so does the overall effectiveness of the squad.

Support craft also use the Hit Point system. They are invaluable for repairing and resupplying the fleet in the middle of battle, and can also retrieve resources for use in constructing new ships.

The following are the various attachments players can use in assembling a space station.

R-Type Command's Forces differ in many ways from the other games in the series, but the most glaring change is that they are no longer invincible. They function as a separate unit when detached. An attached force does not get a turn, instead altering the weapons of its counterpart ship.

Only a few Bydo battleships are available to Bydo commanders, but humanity will encounter a greater variety during their campaign.

The Bydo have an expanded force of fighter units.

The Infected Module is a great, all-in-one support craft.

The Bydo army contains many monstrous craft, about half of which are only found in humanity's campaign.

The Bydo Forces are nearly identical to humanity's.

Irem released two demos of the game, with one demo sampling the EAF and the other for the GZRA. Both contain three stages each, with one of them a remake of a classic R-Type stage featuring the alien boss Dobkeratops.

As a pre-order bonus, a soundtrack disc was included. No announcements have been made for a release outside of Japan.[3], although Irem considered releasing the title on their own after being disappointed with Atlus' translation of the first game.Template:Citation needed

In the PlayStation 3's community-based social gaming network, PlayStation Home, Irem has released a Game Space in the Japanese Home on December 3, 2009 to promote the release of R-Type Tactics II: Operation Bitter Chocolate on the PSP and PSPgo. This is the first PSP title to receive a Playstation Home Game Space.[4]

The available fighters for each side early on.

GZRA Assistants
Add a photo to this gallery 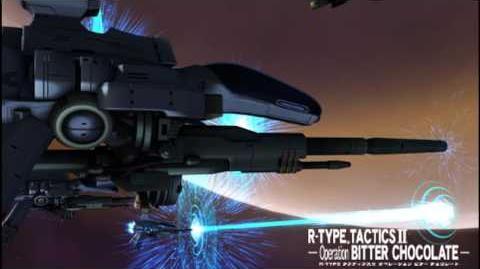 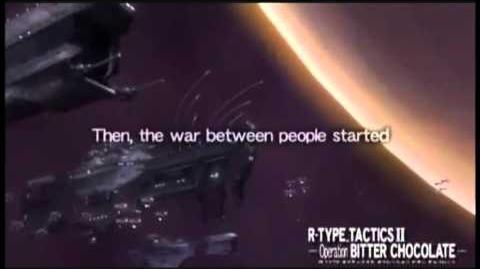 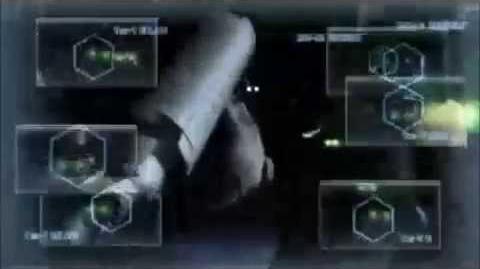 Retrieved from "https://rtype.fandom.com/wiki/R-Type_Tactics_II:_Operation_Bitter_Chocolate?oldid=12833"
Community content is available under CC-BY-SA unless otherwise noted.