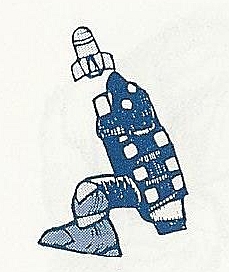 The P-Staff, also known as Pistaph or Relic, is a bipedal missile launcher used by the Bydo to protect fortresses and other important places. This blue mechanoid is present in most missions as a ground-based enemy. It cannot fly, but its missiles often arc high enough that it's a dangerous foe at any height. It's a moderately tough unit that launches upwards of four to six missiles at a time. P-Staffs will take advantage of terrain and may be hard to attack with forward-firing weapons at times. Missiles are recommended, particularly Scatter Bombs. Air-to-Surface Force beams are also highly effective. A few varieties of this enemy have been encountered so far during several encounters against the Bydo.

Automatic missile launcher. Was used as a guard device until its control system was taken over by the Bydo.

Its Japanese name translates to Relic here, albeit with a redesigned appearance and it still fires missiles out of the missile launcher attached to its front.

The Relic in this game also re-appears with a redesigned appearance here, though this time it fires multiple small missiles from its back at once.

Though its appearance does not differ too much from its R-Type Final counterpart, it is called the "Pistaph" in this installment. It's role as ground support has not changed, but Bydo commanders need to make sure it has close air support, as it is a weak unit. Despite this shortcoming, it's one of the few Bydo units with a decent radar range.

RTT1: This unit can only be obtained through hacking.

Retrieved from "https://rtype.fandom.com/wiki/P-Staff?oldid=13076"
Community content is available under CC-BY-SA unless otherwise noted.