Otherwise known as Cyst, Gomander is an iconic, recurring Bydo boss enemy in the R-Type Series. Gomander's core is often protected by biological sheaths or protected by bony tubes. The creature's weakpoint is the blue gem-like orb that opens up briefly at the top. If it takes damage, the orb shuts immediately to prevent further damage. Gomander is a giant lump of flesh with one eye protruding from the top and tubes that let the Outslay move in and out of its body. A Gomander can use anything to nourish itself and will soon grow to extreme sizes. Without an Outslay the Gomander will die, and vice versa, because the Outslay nourishes itself from the excess energy from the Gomander and returns it back inside of its gigantic host. It is unknown whether two Outslays can support two Gomanders. Also, it is mentioned in R-Type Final that a planet-sized Gomander has been seen before.

Referred to as Gomba in the Game Boy release. Clever manipulation of the Force can wedge it into the orb's socket. The best strategy is to leave your Force front attached and then carefully maneuver yourself between the "eye" and the protrusion to the left of it. This leaves the Force where it will damage Gomander, and your ship protected from Outslay's movements (it will fly right over you but not touch you) and projectiles (even without the upper Bit unit).

This time is one of the forms the Phantom Cell assumes in both encounters. The Gomander form is named Darth Gomander.

The first playthrough features a replica Gomander in classic original colors. In the second, advanced playthrough, the Gomander replica is in darker colors.

'A huge living organism. Its cave dwelling was destroyed, forcing it to wander through different dimensions.

Gomander appears in level 5's boss rush. It doesn't follow it's standard attack pattern, but instead flies around the room trying to crush invading pilots. At some point before it's encounter with the pilot, the eye of the Gomander sustained heavy damage. Unlike other missions, Gomander's entire body is vulnerable, not just the blue core. If left alone long enough, the warship's thrusters will break it apart. Also, unlike R-Type Final's incarnation, closer inspection reveals its insides to be solid flesh and not a large stomach; however this may only be due to the graphical limitations of the PS1/PSX.

It can use anything as a source of nourishment. It does not stop growing - a planet-sized specimen has been seen. At giant sizes it cannot maintain itself and dies. It cannot control its own growth. However, the parasitic Outslay regulates excess energy, keeping growth in check.

Pilots actually fly into the creature's innards to take it out. Note that the Outslay is just as active inside the creature as outside.

Gomander makes another appearance in this mission. Beware the Enthrew.

Enlarged Bydo lifeform with multiple orifices that spew harmful fluids. Its weakness is the crystal head.

Inexsis, an large Bydo life-form that also shares an symbiotic relationship with an variation of the Outslay. 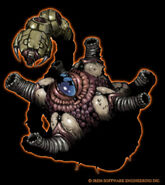 Add a photo to this gallery
Retrieved from "https://rtype.fandom.com/wiki/Gomander?oldid=13266"
Community content is available under CC-BY-SA unless otherwise noted.